Rebecca, your passion, dedication, and guidance in this journey has been so immense and unmatched. I would not have progressed with this book without your support. The Saturday evening sessions with you were such a blessing and, in some cases, so emotional that we had to take time out. You helped me dig into my soul.

My project flourished under Rebecca’s gentle but firm touch. She believed in me and my book, before even I did. I hope every author gets an editor as talented as her. I can’t imagine a better experience all around.

A “Moral and Spiritual Awakening” for the Country?

The 2016 presidential election was on my birthday. I cried nearly the entire day. However (as was the case for many others), once the shock, fury, and sadness wore off, a fire was lit. I’ve started following politics a lot more observantly and participatively over the past couple of years. I am particularly fascinated and inspired by the 2020 Democratic presidential campaign. First, because the Governor of my state (and neighbor!) is running, and second—and more importantly—because Marianne Williamson is running.

I know she’s new to mainstream America, but to so many people, she’s been around “forever.” I first read her books over ten years ago, when my journey to understanding myself and my spirituality deeply began. Her voice was one of many similar voices that articulated a worldview that resonated so deeply with me, that my life simultaneously became very easy and very hard.

It became easier because, now that I had this core understanding of who I am and my relationship to the world around me, I no longer had to search for what I believed in – my newfound beliefs naturally guided my choices and actions. And, it became harder because so many people didn’t understand my beliefs – they hadn’t studied the same books or asked themselves the same questions and come to the same conclusions. It was as though I were speaking a different language, if I tried to speak about it at all.

To be clear, I never needed anyone to agree with my beliefs (although, of course, we all love it when we meet someone who does!) But, I sure as heck would have loved to engage in dialogue with people that had considered the same possibilities, even if they came to different conclusions. I’m grateful to have met many people over the years with whom I can talk to about these beliefs – and by that I mean share who I really am – but they are certainly the exception, and not the norm. And unfortunately, they are not always the people who mean the most to me (i.e. family).

Election years have been extra challenging since establishing my spiritual beliefs, because at least until now, I’ve never known there to be a presidential candidate who approached their campaign and policies from a spiritual perspective – the guiding force behind all choices and actions (“spirituality” from this perspective encompasses not a particular God or religion, but again a worldview—how we view ourselves in relationship to others and the world around us. To me, once we have this piece figured out, everything else falls into place, so long as we continue to practice what we know to be true for ourselves). Without core spiritual principles to guide us (and for the record, the ones I follow are based on love and unity, rather than fear and division), no root problem can be solved – its symptoms can merely be temporarily treated.

Therefore, anytime I’ve listened to a political candidate speak, I’ve been faced with that dilemma – they are not speaking the whole truth. They are not approaching the problem from a holistic standpoint. But the 2020 presidential election feels different. It is different. In fact, I would say it’s revolutionary (or “evolutionary”), because someone like Marianne Williamson has managed to get so far as the Democratic debate stage with the core message that what our nation needs is a “moral and spiritual awakening.” Hallelujah! I never thought I’d see that in my lifetime.

When I first learned she was running for president, I thought “Wow! What a difference that would make. Too bad she doesn’t stand a chance.” I thought America wouldn’t be ready to absorb what she has to say. I thought she’d be written off as “woo-woo” and “politically inexperienced” and made fun of. And yes – all of those things have happened. I was even guilty of thinking she wasn’t qualified, myself. But that has changed. 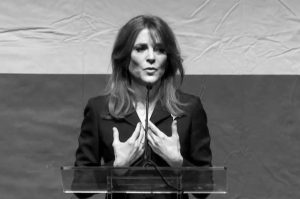 I watched her in the debates – and she did OK, with the very limited amount of time she was given to speak (the moderators didn’t take her seriously, either) – but then I started watching other media appearances she has had on the campaign trail, and even before. I reviewed her policies – some of which aren’t that different from what many other Democratic candidates are calling for, but are articulated in a way that feels so much more thoughtful and holistic and authentic than I’ve seen any other candidate able to do. She reaches beyond Band-Aid fixes and progressively addresses root problems.

I was surprised to discover how incredibly informed she is about American history and politics and how passionate she is about this country – she is far more qualified for the presidency than someone simplistically labeled “author” or “spiritual guru,” which is how the media refers to her. As Marianne has said, why would the people who got us into this mess be the ones most capable of getting us out? Do you think politicians are the only people who have thought deeply about this country? For thirty-five years, she has successfully coached and transformed the lives of individuals and couples the world over. Why couldn’t she do the same for countries, as countries are made up of people?

Here are some of my favorite quotes of hers:

“The principles of health and wellness and an attitude of peace-creation and love is exactly what this country needs.”

“I’ve felt for a long time that people within this space should not be standing on the sidelines. If anything, we should be the biggest grownups in the room… Because if you have a clue as to what changes your life, then you’re the one who has a clue what can change the world.”

And, this one – which is often incorrectly attributed to Nelson Mandela – from Marianne’s book, A Return to Love :

Like many Democrats (and some Republicans), I would be happy to see anyone other than who we have as president. I would be happy to vote for several of the candidates running for the 2020 Democratic nomination. But how friggin’ cool would it be if someone won who bases her candidacy on LOVE and not FEAR? On a “moral and spiritual awakening”?!?

People didn’t take Trump seriously when he first ran for president. Like Marianne, he had no political experience, but entrepreneurial experience instead. The philosophy “no news is bad news” could be applied to Marianne’s campaign as well – even if the media has started out making fun of her, they are essentially giving her free press. Republicans are even donating to her campaign as a joke, because they want to see her qualify for the September debates so they can make fun of her some more.

Wouldn’t it be great to get the last laugh?

My intention with this post is to make a call to action: If you don’t already know and love Marianne Williamson, I urge you to do some more research. I’m copying the video page from her campaign site here, but if you’d like a more neutral source, simply Google videos of her and pick one. She’s been saying the same things for decades. If you resonate with what she’s saying and want to hear more from her, make a donation to her page. Even $1 matters – to qualify for the September debates, she needs 130,000 unique individual donors. (Note: She has already qualified for the July debates, so you will see more of her at least until then).

Even if Marianne doesn’t make it further than July, I am so grateful and inspired by the exposure these beliefs are getting. I may finally be able to have the dialogue I’ve been wanting so badly to have with mainstream America.

This is fantastic! You did a great job, and I am truly honored. Kind of a first for me to have someone get it right. Bravo!

July 31, 2016 // Rebecca Pillsbury // No Comments //
Rebecca is intuitive, talented, and an absolute pleasure to work with. She was not only attuned to the trajectory of the story but able to pull words out of me that made this project effortless and so much fun.

Rebecca did a fantastic job of putting my ideas together in a story that made me shiver with excitement and goosebumps as I read it. I couldn’t have done a better job (or even close to as good) if I’d written it myself.

I love it. You have a rare gift and have made that year of my life come alive on the pages. I cried.